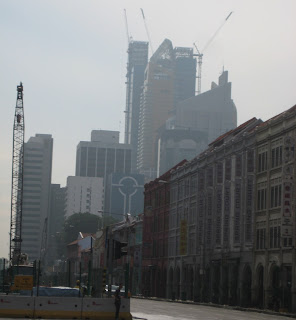 Could the construction crane be Singapore's new National Bird? 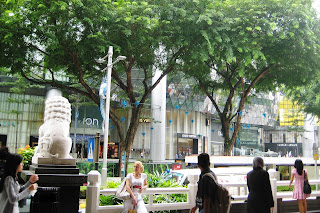 Orchard Road retail - Louis Vuitton, Giorgio Armani
﻿Some readers may wonder if I see any particularly strong real estate markets during my travels, since I seem to so often be reporting bad news.
How about an Asian country that grew faster than China in 2010, with an unemployment rate of only 2%?

That country would be Singapore. Year 2010 GDP growth is now expected to measure 15% as the result of a manufacturing-led growth spurt in the latter half of the year, second in the world to Qatar. Strong population growth (estimated at 1.8% per year), fueled by the developed world’s most lenient immigration policies, is creating a housing shortage.

A recent joint survey by Price Waterhouse Coopers and the Urban Land Institute ranked Singapore as the top investment destination in Asia.

Singapore also has ambitions to be the “Switzerland of Asia”, and one recent bold move by the government has been to double the area allocated to the Financial District, where CBRE has reported the office vacancy rate falling to 6.7% after brisk expansion of financial and legal firms, including major investment banks. Singapore is already Southeast Asia’s regional banking center, but the doubling of size of its Financial District would make it equivalent in size to Hong Kong's. About 7 million square feet are scheduled to be added by 2015. So serious is Singapore about achieving banking supremacy in Asia that they have been holding job fairs in the U.S. and U.K. to recruit banking talent.

Singapore enjoys the commercial advantages of:

1. A large, world class airport
2. English as the official language
3. The world’s busiest port (as measured by shipping tonnage)
4. An efficient, business-friendly government lauded for the absence of corruption
5. An educated and truly multicultural labor force with ties to many disparate spheres of influence. The three largest ethnic groups in Singapore are the Chinese, the Malays/Indonesians and the Indians, enabling ties to some of the fastest growing economies of the world – China, India and the Middle East.
6. No capital gains tax (except on residences held less than 3 years)
7. No restrictions on foreign ownership of commercial real estate.

Real estate prices fell during the Global Financial Crisis of 2008, but residential prices have been rapidly increasing since the second quarter of 2009. The residential price index for the 3rd quarter of 2010 reflected a 22.9% increase since the same quarter a year before. For those who are tempted to speculate, though, the government’s Housing and Development Board has enacted measures to counteract a bubble from forming, such as:

1. The sale of ten major government land sites to residential developers, allowing an increase in residential supply
2. A 3% tax on properties held less than three years
3. Minimum cash down payments of 20% on second homes (when financed by government-regulated lenders) and the elimination of interest-only mortgage loans
4. Continued restrictions on foreign ownership of landed homes (as opposed to condos)
5. Non-renewal of financial assistance to real estate developers

As for multifamily investment and development opportunities, one must consider that the Housing and Development Board owns 81% of rental units in Singapore, and government policy has the potential to mute increasing housing prices, even during a housing shortage. The luxury rental market should be least affected by competition from the government, nevertheless, as is housing for expatriates and immigrants prevented from receiving government-subsidized housing (restricted to Singapore citizens or permanent residents). At today’s rich valuations, with gross annual rent multipliers of about 29, however, development would spell more opportunity than investing in existing properties. Such a high multiplier can only be sustained with ultra-low interest rates, and one cannot predict how long such low rates will continue to last.

On the commercial side, overbuilding is still a possible hazard. For instance, CBRE has reported steadily increasing "capital values" (a valuation-based average rather than a sales-based average, although one would expect valuations to be influenced by recent sales) in the office, industrial and retail sectors, although office and retail rents have declined since last year. Office rents have started to climb again, though, in response to low vacancies, while “prime” retail seems to still have a problem.

Valuations appear to be quite rich. With an average “capital value” of $5800 per square foot and average annual rent of $373 psf for “prime retail” space ($1 SGD = $.77 USD), notably the Orchard Road area of town, the indicated gross rent multiplier of 15.5 seems unsustainable in the face of falling rents. The reason for the falling rents seems to be overbuilding.  According to CBRE. 1.7 million square feet of space was completed in the first three quarters of 2010, 39% of which was in the Orchard Road area, including the new TripleOne Somerset, 313@Somerset and the Mandarin Gallery. Other new malls in Singapore include City Square Mall, Iluma, Yew Tee Point, and Tampines 1.

The gross rent multiplier for Class A office is as even giddier 21.7. “Prime residential rental properties” are perhaps the most richly valued at the moment, though, with an average GRM of 29.5. As a point of reference, whenever I see market average GRMs pass 14 in the U.S., it is usually a precursor of a market correction.  The down side of "real estate growth stories" is that pricing can become quite inflated by the onrush of new investors who expect property value appreciation to rescue them from low or even negative current returns.

That being said, I did not see vacancies in Singapore that would put this city-state at risk of soon becoming “The Next Dubai.”  Nevertheless, buying at such inflated prices seems antithetical to the investment advice of such legends as Warren Buffet or Sir John Templeton, who famously stated "The time of maximum pessimism is the best time to buy, and the time of maximum optimism is the best time to sell."

Perhaps the most attractively valued sector at the moment is the industrial sector, where rents continue to increase and the GRM average is just 12.7. Manufacturing has led the way in the increase in GDP; leading industries are electronics, chemicals and biomedical products. The port itself creates substantial demand for warehouse space.

For those counting on continued 15% GDP growth, the forecast from Singaporean economists for 2011 is considerably more subdued – about 4 to 5%.
Posted by Vernon Martin, MSRE, CFE at 6:00 PM


Thanks for any other informative site. The place else may just I get that kind of info written in such an ideal means? I have a mission that I am just now operating on, and I've been on the glance out for such info. aol email login

Great post again! great job. And I am satisfied to read your article. you can fill your visa application form turkey & within 24 hour you can get your visa and pay Turkey e visa cost.The process is very simple, all you have to do is fill our online application form.

This is a wonderful inspiring article. I am practically satisfied with your great work. You have really put together extremely helpful data. Keep it up... Continue... Getting a kenya e-visa is quite convenient. Anyone can apply at any time of the day.

Nice post. keep up the good work....India tourist visa from USA, Yes US citizens easily can apply for India tourist visa. Apply for the Indian e-Tourist Visa through an online visa application system.

I think this is an informative post and it is very useful and informative. So, I would like to thank you for the effort you put into writing this article. The Indian e visa online or Electronic Visa (eTV) is an online travel authorization. You can apply online for e visa to India via the India e visa website.

Good info for a new blogger...it's really helpful. Hello friends, are you interested in traveling to India, then you need a visa. And you know how to apply for emergency visa to India from USA? You can find this information on our Indian Visa website. We provide information about Indian visas. You can visit our website and read here....