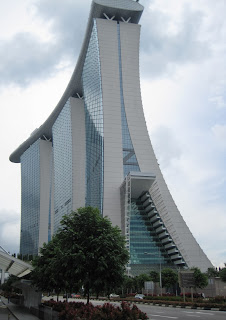 I have been a member of the Association of Certified Fraud Examiners for 11 years now, and last week I attended their annual Asia Pacific Fraud Conference for the second time. I found it surprising that this year’s conference was held at the Marina Bay Sands casino hotel in Singapore, considering that gambling is a popular form of money laundering in Asia, but perhaps ACFE wanted us to see it firsthand.

I received useful knowledge from this conference, even if it did not directly relate to real estate. To this purpose, I thought I would summarize here the types of fraud and attempted fraud I have been encountering in my own international real estate work.

One of the things I learned early in my career at Jones Lang Wootton was that the dodgiest deals often had to travel the farthest in securing investors or financiers, so one must consider that international real estate transactions already present an elevated risk for fraud. Here are the types of fraud or misrepresentations I have personally witnessed:

1. Puffery regarding the quality of the distant real estate assets. “Resort land” is often no more than a sugar plantation or a mangrove swamp with or without development approvals. What is represented as “next door” to a prime area is often more distant than represented. Leaseholds about to expire have no value without documented proof of renewal in place. “Rental yields” often fail to stand up to scrutiny. “Substantially sold out projects” sometimes hang by a thread in the form of a minimal 5% deposit from would-be buyers (which buyers are willing to forfeit if the value of their lot declines by more than that). In this line of work, I am sometimes placed in the uncomfortable position of asking myself “they made me fly thousands of miles to see this?”

2. Bait and switch. One property is advertised or being pledged as collateral for a loan, but documents submitted to me are for another property. One particular ploy to watch for in Latin America is when documents refer to “Lote S/N”, which is an abbreviation for “Lote Sin Numero”, or “Lot without a number”. It may not be the same property, and professionals will need to be consulted to establish its proper identity.

3. No valid purchase contract. A foreign loan applicant must submit a valid, executed contract to purchase a property he does not yet own in order to receive purchase money financing. The purchase contracts I often receive are often submitted as a draft document in MSWord, with many blank fields, without proper signatories, and sometimes the seller is not the same party as the present property owner. These flaws do not allow me to consider the purchase contract to be valid, and they only arouse suspicion instead. Think about it -- how did you close on the purchase of your first home without a binding purchase and sale agreement? Yet these foreign buyers will tell me of impending purchase closing deadlines without even having ratified agreements in place.

There are two different scenarios in which I’ve seen this done:

a. There is another real purchase contract for a lesser amount of money, or

b. There is no proof that the legitimate owner of the property consented to sell the property or even knows about the phony purchase contract. This latter scam seems to be increasing.

4. Misrepresentation of ownership (similar scam to 3b). Foreign loan applicants sometimes attempt to pledge other people’s properties as collateral for a loan. One common ploy is when they present excuses as to why I cannot contact the rightful owner, such as “he is a high government official who is hiding his assets”. These scams quickly fall apart when the borrower cannot produce documents that an owner would be expected to have, such as a property tax bill or the actual development plan that has been officially approved. Government officials’ secrets are safe with me, any way; my job is to perform due diligence on a particular piece of real estate, not judge the integrity of government officials or violate principles of confidentiality. My job is completely apolitical.

5. Compromising the property inspection. Yes, I like to ride helicopters, but the proffered helicopter ride is often done to prevent me from discovering true ground conditions. Mangrove swamps can appear to be solid ground from the air, for instance, and rugged terrain can sometimes resemble terrain than it is flatter than it really is. In Fiji, I rented a hotel room a quarter mile’s walk up the beach from the subject property so that I could walk to the property that I was only allowed to see from a helicopter. It turned out to be a mangrove swamp. Likewise, after insisting in Belize that I be taken to the property’s edge, only then did I find out that the property could not even be reached by 4-wheel drive vehicle. I would have had to rent a tractor.

6. Tricking the appraiser by showing him or her the wrong property. I have seen MAIs from famous international real estate firms fall for this trick, which should not happen to any appraiser or valuer who has the ability to identify a property on a map or the ability to read a legal description. When will this skill be taught in real estate valuation courses?

7. Attempting to influence the lender or appraiser with biased feasibility or valuation reports from “experts”. Despite what is sometimes a long list of credentials of the expert, the biases are usually evident in the reports themselves, which are often revealed through disclaimers or “extraordinary assumptions”. I hesitate to be convinced by an expert who is being paid to be an advocate for a particular real estate transaction, especially if they are being paid to meet me or travel with me or pretend to be my new best friend.

Even scientific and engineering reports from other countries can be biased. I remember one environmental report that conveniently removed one legally protected mangrove location in between the first and second editions of their report, thereby reducing the number of mangrove locations from 3 to 2. Luckily, I saved a photo of the problematic mangrove location.

I used to be challenged by clients for rejecting reports from famous firms, but the reports from these firms provide all the ammunition I need to discredit them, such as disclosures of pre-existing conflicts of interest, mandatory indemnification agreements in the valuation of questionable projects, and other disclosures indicating a lack of due diligence or verification of borrower-submitted data.

I have examined your own content. It turned out and so helpful. This type of very good content that which you get created. Cheers pertaining to sharing the information you have around!
USA property scams

Thanks a lot, this post is really helpful. I am new to real estate and your site is helping me out a lot with its informative posts and tips. You are doing a great job here, thanks!

Every week-end I used to pay a fast visit this site, because I’d like enjoyment, because this web site conations certainly fussy material.Jadescape showflat location

Werlte is the right place for anyone looking for a perfect symbiosis of city and country life and who would like to find both the hustle and bustle of a big city and the quiet in the countryside. Immobilien Werlte